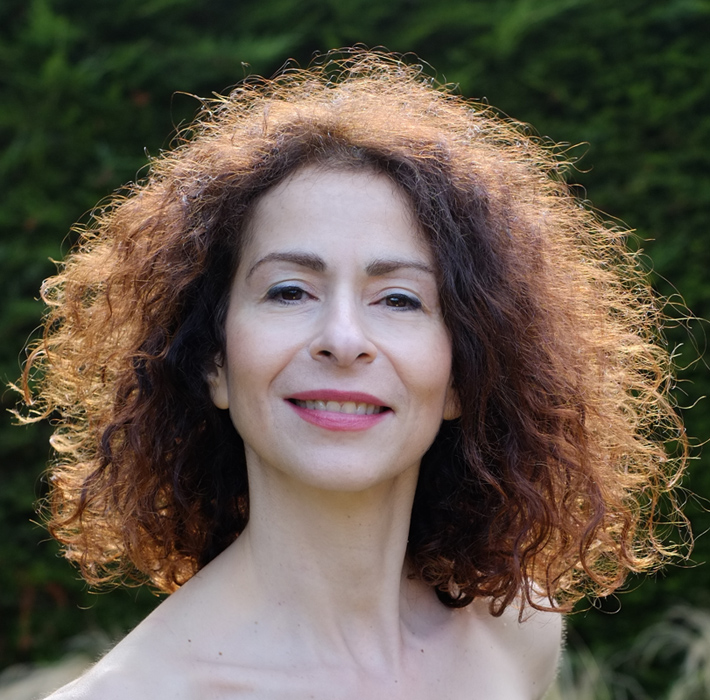 My images are my innervoice, out of soft whispers and violent screams, cames out my star…

The Artist is not so gentle as she looks

Kris Séraphin-Lange is confusing, enigmatic. A thin brown liana with a dancer’s gestures, she casts a spell on you at first glance.
Her photos are like her, sharp as well as erotic, bright as well as ethereal. Velvety flesh and blood red. Her red, her mark, like a warning : passion and danger.
Behind her oriental beauty, the Lebanese artist has suffered in her own flesh. And she may use such ordeals to feed her work. But not only.
For a long time, she has been telling about herself, she has been exploring through her body.
Her photos are quite constructed with vibrating and dense colours under the vitality of the movement.
Women’s bodies, men’s pulsions. With a happy voyeurism, Kris chases them :
She captures them all over in her photos, she rushes them, fondles them, shakes them to find out the truth. Her truth ?
Kris is looking for the intimate grace, for beauty, she finds it and transmutes it into a show.
A volcanic, vibrant and disturbing seduction.
Kris needs to create through photography in order to know and recognize herself.
Catherine Schwaab

Kris Seraphin-Lange is a Parisian-based photographer.

Coming from a multicultural background,
she was born in Egypt and bred in Lebanon, yet followed a French education and cultural upbringing.

She has always had a passion for images and the way in which they often provoke emotion.
As a child, she remembers spending her days tearing out all kinds of pictures from magazines and then adding them to her collection.
At 15, her parents bought her a Minolta X500. It was her first camera and one that she found would introduce her to a whole new way of expressing herself using a visual medium.
After a seven-years of working as a graphic designer, Kris decided to turn to doing photography full time. She has contributed to magazines such as Paris Match, Studio, and Psychologies, as well as foreign publications in Lebanon and Australia.

In 1998, she organises her first photo exhibition called VISION FEMININ (A FEMININE VISION) in Paris.

Through her present photographic work, Kris tries to pass on the power and the beauty of emotions.